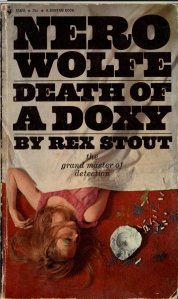 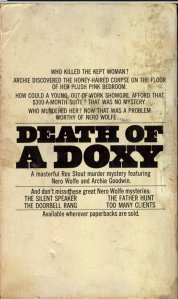 Contents:
Death of a Doxy

Who killed the kept woman?

Archie discovered the honey-haired corpse on the floor of her plush pink bedroom. How could a young, out-of-work showgirl afford that $300-a-month suite? That was no mystery. Who murdered her? Now that was a problem worthy of Nero Wolfe…

DEATH OF A DOXY

Poor Orrie Cather. He was being held for a murder he swore he hadn’t committed. Poor Avery Ballou. He’d been paying the rent on the victim’s apartment and if anyone found out, Orrie’d be free and Ballou would be suspect #1. But most of all, poor Isabel Kerr. She was so young, so beautiful, so stone-cold dead.

Then, of course, there was poor Nero Wolfe. Orrie was a friend, Ballou was his client, and the real murderer was playing hard-to-get …