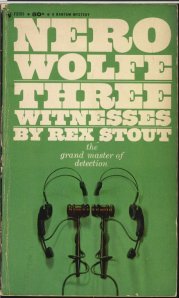 The Next Witness
When a Man Murders…
Die Like A Dog

THE NEXT WITNESS was Nero Wolfe himself! But he fled the witness stand to expose a cunning killer.

WHEN A MAN MURDERS… The corpse kept coming back to life. But alive or dead, it was worth a million dollars.

DIE LIKE A DOG but the black Labrador retriever lived – to bear witness in a murder case.