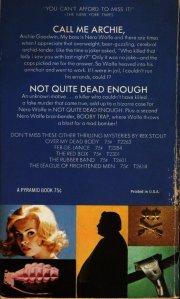 Archie Goodwin. My boss is Nero Wolfe and there are times when I appreciate that overweight, beer-guzzling, cerebral orchid-tender. Like the time a joker asked, “Who killed that lady I saw you with last night?” Only it was no joke – and the cops picked me for the answer. So Wolfe heaved into his armchair and went to work. If I were in jail, I couldn’t run his errands, could I?

Not Quite Dead Enough

An unknown motive … a killer who couldn’t have killed … a fake murder that came true, add up to a bizarre case for Nero Wolfe in Not Quite Dead Enough. Plus: a second Nero Wolfe brainbender, Booby Trap, where Wolfe throws a blast for a mad bomber!