Too Many Clients
Might As Well Be Dead
The Final Deduction

Three Aces
Happiness is a Nero Wolfe mystery for so many aficionados of civilized crime stories that the Omnibus has become a valued tradition; there have been five before this, each gathering a few previously published Rex Stouts in one volume. Three Aces is the first to include three complete full-length novels, and will prove a treat as special as a dish from the kitchen of Nero’s unique cook, Fritz.

In Too Many Clients, three different clients clamor for Nero’s help when a big businessman is murdered in his $81,000 love nest. Archie Goodwin must use some of his best talents to sort them out before Nero can even begin the case. Might as Well Be Dead involves, along with much mayhem and imperiled missing persons, a great national scandal. The Final Deduction puts Nero and Archie in the saddle in pursuit of a kidnap for half a million dollars, with murder on the side.

The team is in top form in all three of these, a prize for any fan who missed them before or who wants them on hand in one handsome superStout volume.

“Not two characters alone, but a palpable atmosphere exists in that brownstone house on West 35th Street. And what sinewy, pellucid, propelling prose tells those tales – allegories of the human pilgrimage, rather – in which there is little or no blood, but rather the play of the mind. . . . In this sublime duet of Don Quixote and a glamorized Sancho Panza who go tilting together against evil, there is no mystery, nothing but matter for admiration, edification, and (if desired) self-identification. the true mystery is in their inspired creator, Rex Stout.” -Jacques Barzun

Might As Well Be Dead - January 1967 - Second Printing - Front Cover 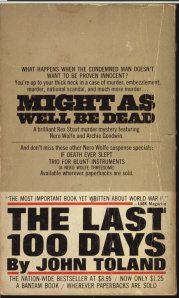 Might As Well Be Dead - January 1967 - Second Printing - Rear Cover

WHAT HAPPENS WHEN THE CONDEMNED MAN DOESN’T WANT TO BE PROVEN INNOCENT?

You’re up to your thick neck in a case of murder, embezzlement, murder, national scandal, and much more murder…

Eleven years ago, wealthy Nebraska businessman James Herold gave his only son, Paul, a very raw deal. Now he wants Nero Wolfe to track Paul down so that he can make amends. But what if the young man doesn’t want to be found… and what if he’s the same P.H. who’s currently on trial for cold-blooded murder? It’s a case that will draw the great detective and his dedicated sidekick into a sticky wave of deceit, one that will tax their resources to the utmost, and even cost them one of their own.