This is one Rex wrote or at least was published in 1940. He also used the same basic story line in a Nero Wolfe mystery named The Bitter End which was first published in the November 1940 issue of The American Magazine, later in a limited edition volume by the name of Corsage: A Bouquet of Rex Stout and Nero Wolfe, and then after he had died, in Death Times Three in 1985.

This cover is a second printing Pyramid edition printed in April of 1968.

Corsage: A Bouquet of Rex Stout and Nero Wolfe

I would like to take this space to say “Thank You” to the good folks at free-markets.com that gave me the above scan of Corsage: A Bouquet of Rex Stout and Nero Wolfe. This limited edition printing contained the first book publication of “Bitter End” and the article “Why Nero Wolfe Like Orchids” by Archie Goodwin as well as an extensive interview with Rex Stout.Take a look at their Nero Wolfe pages at

They have an 18 x 12 limited edition print of the cover art for Corsage available for sale, and an audio tape offering “The Informal Interview with Rex Stout conducted in April of 1973” among many other interesting collectors items. 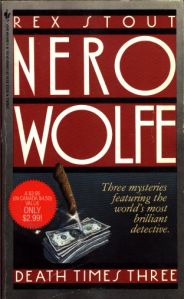 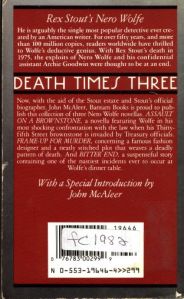 Rear Cover Intro:
DEATH TIMES THREE
Now, with the aid of the Stout estate and Stout’s official biographer, John McAleer, Bantam Books is proud to publish this collection of three Nero Wolfe novellas. ASSAULT ON A BROWNSTONE, a novella featuring Wolfe in his most shocking confrontation with the law when his Thirty-fifth Street brownstone is invaded by Treasury officials. FRAME-UP FOR MURDER, concerning a famous fashion designer and a neatly stitched plot that weaves a deadly pattern of death. And BITTER END, a suspenseful story containing one of the nastiest incidents ever to occur at Wolfe’s dinner table.